Skip to content
Fall and Winter 2022
Feature Stories:
Regular Columns: Readers Forum
Fabergé’s 1888 Cherub Egg with Chariot – Reconstructing a Lost Treasure!
By Greg Daubney (UK) and Chad Solon (USA)
Part of the allure of studying the art of Fabergé is discovering objects lost in the chaos and aftermath of the 1917 Russian Revolution. Out of 50 Imperial Easter Eggs by Fabergé presented to the Russian Empresses Maria Feodorovna (1847-1928) and Alexandra Feodorovna (1872-1918), six are still missing today – 1886 Hen with Sapphire Pendant Egg, 1888 Cherub Egg with Chariot, 1889 Nécessaire Egg, 1897 Mauve Egg with Three Miniatures, 1903 Royal Danish Egg, and the 1909 Alexander III Commemorative Egg. Comprehensive archival data published by researchers over the years for the 1888 Cherub Egg with Chariot is summarized and updated in our essay:
Fabergé, Tatiana, Proler, Lynette G., and Valentin V. Skurlov. The Fabergé Imperial Easter Eggs, 1997, pp. 100, 237.

A complete photograph of the lost Cherub Egg with Chariot has not yet been found. A photograph of the Maria Feodorovna vitrine in the von Dervis Mansion exhibition from March 9-15 (o.s.) 1902 is extant with two reflections of the egg (green circle), and its decorative sapphire gem at the top, a cherub, and one spoked wheel (red circles). Verified historic details for the years 1888-1922 allow researchers to attempt reconstructions of the egg’s outer appearance, perhaps leading to its rediscovery. 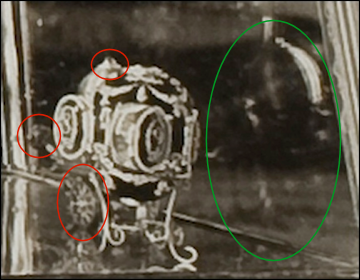 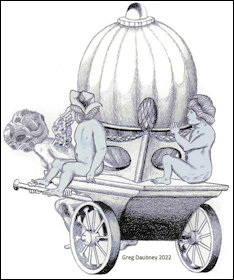 This design is based directly on the reflection in
the vitrine glass, so is a mirror image. In
reality, the figures face toward the right and
are on the opposite side of the chariot.

The missing egg consists of a chariot with an egg pulled by a cherub, leaning forward from the effort. The chariot is made up of a rectangular platform supported by two spoked wheels. On top of the platform is a decorative railing which forms a kind of basket. Sitting on it is the egg, which has vertical ribs and a sapphire finial identified in its 1888 Fabergé invoice1, cherub and chariot are made from gold, or may simply be gilded. Some part of the object is decorated with small diamonds, cited in the 1917 description below. Photographic enlargements were used to identify the various components.
Chronological Review of Cherub Egg Timeline (1888-1922) Based on Published Archival Sources 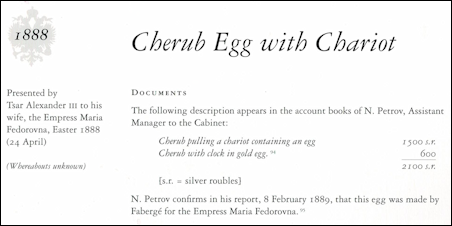 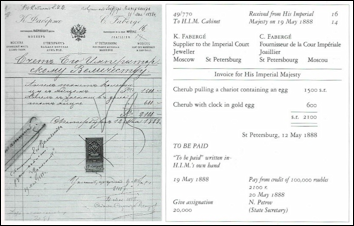 Many Fabergé imperial eggs open to reveal surprises. Based on the wording of this invoice, it is unclear whether the second item was meant to go inside the first, or are there are possibly two separate items.

(Fabergé, Tatiana, et al., 1997, p. 100)
Maria Feodorovna kept the egg initially at the Gatchina Palace, their primary residence outside St. Petersburg. By 1917, the Cherub Egg was in the Anichkov Palace, Maria Feodorovna’s primary residence in St. Petersburg after she was widowed in 1894. Based on the 1997 publication by Carl Fabergé’s great grand-daughter, Tatiana Fabergé (1930-2020), and her research associates the archival time line shared for the years 1888-1922 is very helpful.
Archival Data from Two Other Sources (A. and B.) 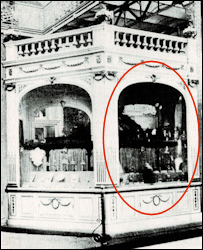 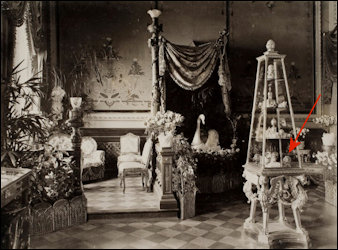 B.
A. April 14 – November 12, 1900 Exposition Universelle in Paris – only known photograph with a Fabergé display on loan from the Russian Imperial family. (von Habsburg, Géza, and Marina Lopato. Fabergé: Imperial Jeweler, 1993, p. 117).

A contemporary account of the venue is extant, “Collection Impériale – Les oeufs de Pâques de l’ímpératrice – Un coin du foyer impérial – Bibelots augustes”. Le Matin, Lundi, 14 Mai 1900. (Miek’s Fabergé Eggs Website, the 1900 Paris Exposition Universelle contains the entire Le Matin article. According to the newspaper account, 14 Imperial eggs were shown. The Fabergé firm had delivered a total of 20 Imperial eggs to both Empresses before the eggs for 1900 were presented. The identities of seven eggs displayed are known, so it is possible the Cherub Egg was shown? No exhibition catalog.)

Two archival sources (C. and D.) – a sale catalog from Lord & Taylor (1933 or 1934?) and a 1941 auction lot description from the Parke Bernet Galleries, both in New York City, do not match the above Cherub egg descriptions:
C.

D. The egg’s small size (2 or 3 inches) stated in the Douglas auction catalog (September 26-27,1941) does not match the lost Cherub Egg which should be in the size range of 11.5 cm / 4.5” in comparison to other imperial Easter eggs by Fabergé. Despite this, the description is still interesting and is the only known reference to a possible location of the missing egg after 1922.

In 2007, while studying the 1902 von Dervis photographs, Vincent and Anna Palmade discovered an intriguing image which appeared to be the missing egg.4 Their drawing shows the cherub looking backwards and pulling a chariot with an egg with diamond bands on it, and four years later the cherub was revised looking forward and the egg is ribbed. Their 2011 version features a more elaborate gilded chariot decorated with swags and bows. In 2014, co-author of this article Greg Daubney after seeing the re-discovered 1887 Third Imperial Egg by Fabergé at the Wartski London unveiling, created an accurate to-scale drawing based on reflections seen in 1902 photograph. In 2021, two digital versions appeared on the Internet.

Artist Renderings over the Years 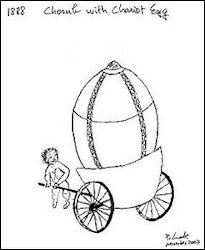 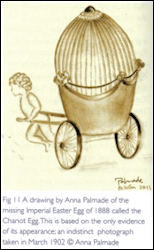 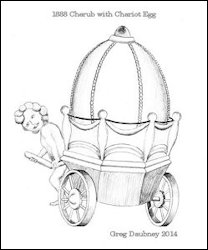 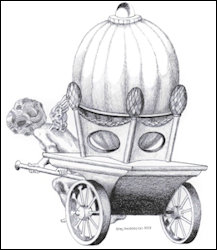 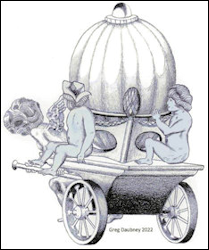 Digital Versions of the Cherub Egg 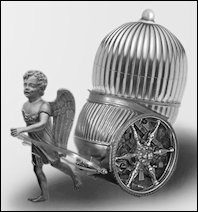 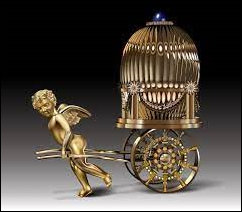 There have been no confirmed sightings of the egg nor additional archival evidence for the 1888 Cherub Imperial Easter Egg since 1922, when the egg is described as a flask, possibly a translation error. Two assumptions for the years 1934 and 1941 studied more closely, do not properly identify the lost egg. To find the Cherub with Chariot Egg or additional archival documentation, the following resources – if extant – might be helpful:

The authors wish to thank all contributors past and present for their dedication in sharing details leading perhaps to the rediscovery of the 1888 Cherub with a Chariot Egg by Fabergé. 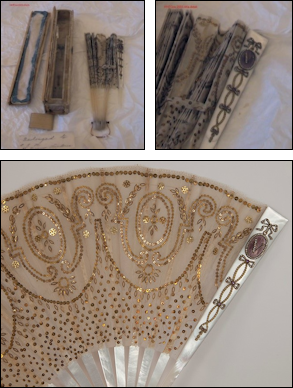 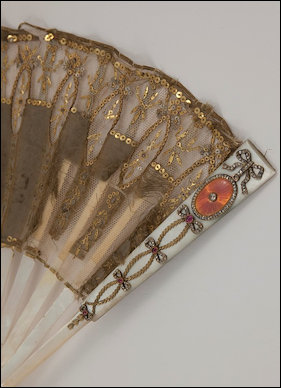 Mother-of-Pearl and Gold Sequined Lace Fan.
Monture – Fabergé Workmaster, Mikhail Perkhin
(Active 1899-1903)
(Fabergé: The McFerrin Collection – The
Opulence Continues … 2016, p. 62)
Pleated and folded fan leaves made from an animal skin, a sheet of paper, or a fabric (silk, muslin, or lace) with added sequins by their very nature are delicate. While the Fabergé montures have survived for over a hundred years, the leaves may require restoration and/or conservation. Of special interest are two fans from the Artie and Dorothy McFerrin Collection of 14 Fabergé-mounted and Russian fans on loan to the Houston Museum of Natural Science in Texas. One of them is a muslin fan with a leaf expertly restored before it was sold at auction (Christie’s London, Harewood Collection sale, December 5, 2012, Lot 607), and another – a lace fan – needs a bit of tender loving care from a professional fan conservator. Two groups of fan enthusiasts are active in these areas of expertise: Fan Association of North America (FANA, USA, Fan Restoration Samples), and Fan Circle International (FCI, UK, Conservation).
Readers Forum
Fabergé in the News
Auctions: 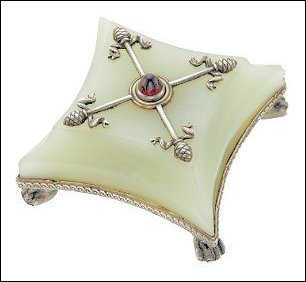 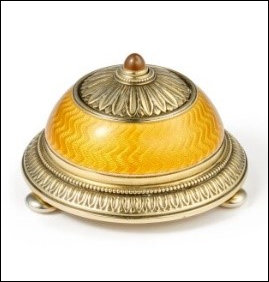